Hard Work: The Fountain of Youth?

“Hard work feels good,” Sheila Lindsay was overheard telling a fellow resident from her home in the Egerton neighbourhood in the Village of Riverside Glen after she’d finished her first volunteer shift serving lunch. “I even feel a little younger now.”

The idea of Sheila helping the hospitality team grew organically over what might have been a simple jest. Sheila asked neighbourhood coordinator Michelle Mayhew one day what might happen if no team members showed up to serve meals and Michelle responded with a smile: “I don’t know Sheila, why don’t you do it?”

And so it was that on a non-descript Tuesday afternoon, Sheila worked alongside team member Maria Orlando serving lunch. She’s now a committed volunteer in the dining room helping set and clear for all meals in the neighbourhood. It doesn’t surprise recreation team member Mary Haggarty in the slightest to see Sheila hard at work. She’s always been active in village life and always looking to offer herself in support of others.

“She’s the Jill of all trades,” Mary says with a laugh, noting that Sheila was recently recognized for her volunteerism at a recent village-wide appreciation night.

Sheila, with a coy chuckle, says an active lifestyle “keeps me out of trouble.”

But she also says it helps give some shape to her day and structure to keep her organized. One of the risks facing people who move into long-term care or retirement settings is a decline in their physical activity, which can lead to declining health overall. Sheila’s volunteerism is an example of what is possible when residents choose to get more involved by sharing their ideas and ambitions with team members.

According to the philosophy that guides the Move More initiative, which was developed through the RIA to promote more active lifestyles for village residents, anytime the body is moving there are benefits. Even seemingly simple activities like setting up the dining room can promote brain health, increase energy, reduce pain associated with arthritis, improve sleep and strengthen the immune system. 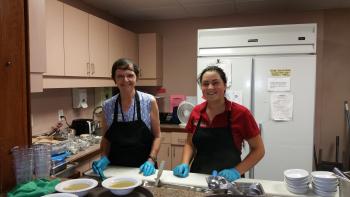 Sheila may not have considered these benefits in her choices, but they are real all the same. She’s simply happy to be of service and would encourage other residents to speak with the team members in their neighbourhoods if they’re interested in moving more and getting involved in every day village life.