Sharing the Successes of Restorative Care

Innovation Summit shines a spotlight on strength of the program

On the first morning of the RIA/Schlegel Villages Innovation Summit in Brampton June 15-16, Olivia Neilpovitz and Erica Hooker from the Village of Aspen Lake shared their insights into restorative care. Little did they know that Chuck Repasi, a resident from the Village of Wentworth Heights, had come into the room eager to support all they had to say based on his recent experiences. 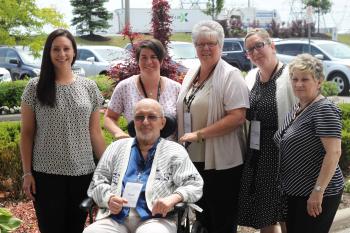 Chuck had started his restorative care program six weeks prior in the hopes of regaining some of the independence he’d lost due to various health challenges. This is the essence of the program, as Olivia and Erica explained: people who’ve faced declining abilities work alongside team members through a detailed individual plan in order to reach their desired goals.

Chuck, alongside a few dozen others, listened intently as the presenters explained how their approach to restorative care works because, first and foremost, they identify residents who would not only benefit but also be eager to participate. The restorative team that then supports each resident is multidisciplinary and ensures the plan is continually assessed to see that progress is being made. Consistency can be a challenge, they admitted, so it’s imperative that every team member is on board for when they are, success is more likely to happen. Towards the end of the presentation after sharing a few examples of the successes they’ve played a part in, they took questions.

This is when Chuck shared his story. Last fall Chuck suffered a fall that resulted in C5 tetraplegia, severely limiting the use of all of his limbs. When he came to the team at Wentworth Heights, he was entirely dependent on them. Through multi-disciplinary assessments and conversations with Chuck, however, they decided restorative care was an option.

“My goal was to walk,” Chuck told the audience at the summit. He wanted to gain strength in his hands so he could eat with more ease; he wanted to use the washroom on his own, brush his own teeth and shave himself, perhaps.

Within six weeks, he was using the sit-to-stand lift and taking care of many of the basic personal tasks that so many people take for granted. His confidence has grown and his will to continue improving is fierce.

“It feels good, knowing I could help somebody else,” Chuck says of the fact he was able to attend the summit. “Don’t be afraid,” is his advice to others who may be reluctant to commit to restorative care. “Once you achieve your goal or part of your goal, you feel good about yourself and that’s one of my main goals as well, to feel comfortable in what I am.”

Life can throw many challenges in any direction – the key is how you handle it and with the support of restorative care teams, people like Chuck are rediscovering themselves in exciting ways.