Support for CLM in Haiti Carries On

On a hot and muggy Haitian morning in the spring of 2015, Gauthier Dieudonne, program director with Fonkoze’s Chemen Lavi Miyò (CLM) program, spoke to 150 women who were celebrating their success after 18-months of hard work climbing their way out of extreme poverty under CLM’s support and guidance. 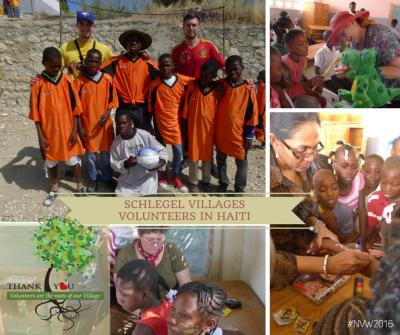 “ ‘This is not something free,’ ” he told them. “ ‘We don’t just hand you a certificate, you don’t just graduate – you earned this.’ They may thank us, but they are the ones who did it and I told them not to let anybody ever tell them they can’t do something, because they’ve proved they can do it and they can continue.”

Chemen Lavi Miyò, which means “the pathway to a better life,” has grown to be part of the Schlegel Villages culture in the past five years as team members, residents and families come together annually to raise funds in support of the Haitian families supported through the program. The women who become part of CLM learn how to manage assets and create a sustainable means of earning income. They have access to health care, their children go to school and they live in stable, safe housing. By the time they graduate, they are transformed, carrying themselves with confidence while looking ahead to a future filled with hope.

The tradition of neighbourly support for CLM and those living in extreme poverty in Haiti’s rural countryside will continue when the 6th annual Hand up for Haiti 5k Walk/Run launches Sept. 11 at the Williamsburg Town Centre in Kitchener. The event, led by Schlegel Villages and community partners such as ProResp and Arvan Rehab Group, has raised more than $200,000 in the past five years.

Locally, Hand up for Haiti has grown to represent a growing sense of community, drawing together the villages and other branches of RBJ Schlegel Holdings (which owns Schlegel Villages) alongside neighbours who come for the music and family events. There’s almost a carnival-like atmosphere that day, as young people walk alongside the oldest generations in support of neighbours far away they may never meet.

But the sense of community extends far beyond, and some from the villages have been to Haiti, witnessing firsthand the impact of the support generated through the Hand Up For Haiti events. In 2014 and 2016 groups of around 25 ambassadors from Schlegel Villages travelled to Haiti, volunteering their expertise and learning about Haitian life. They met Gauthier and the CLM team and they saw pride in the eyes of women who’ve found a new path in life, thanks in large part to CLM’s support and guidance.

“We saw all the various stages of the program,” recalls Jake Corrent a kinesiologist from The Village of Aspen Lake who was part of the 2016 group that visited Haiti.“We someone who was only a month in and they were still digging their latrine, and then we saw more than 200 people graduating, which was crazy. You could see how empowered they were.

From One Village to Another

The Gift of Being Present

Stories of Adventure and Lives Lived Well in Emma’s Neighbourhood