Seeking a Different Story out of Haiti

At the risk of generalizing, I think it’s safe to say that when most people think of Haiti they picture extreme poverty exasperated by the deadly force of nature, which unleashes disaster upon disaster upon the people of a struggling land. 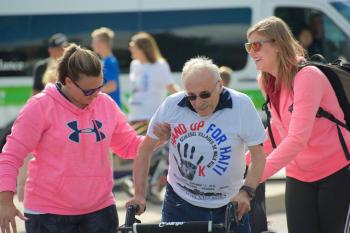 This picture, while accurate in many ways, is based upon the ongoing narrative in the traditional media in Canada or the United States, where there is very little room for the stories of success that arise from the small Caribbean nation. The ink is reserved for earthquakes, hurricanes and cholera outbreaks, so unless they’ve been there to see the land and meet her proud people, that’s all outsiders will know.

But there are stories of strength, success, perseverance and resilience among the proud Haitian people that find no voice in our newspapers, sound-bite television clips or social media memes. But these stories are real and Schlegel Villages has been there to see it.

The numbers from Sept. 11 aren’t in yet but organizers of Schlegel Villages’ annual Hand up for Haiti 5K walk/run fundraiser can safely say that in the past six years, well over $200,000 has been raised through the event. These funds are used to directly support Fonkoze’s Chemen Lavi Miyo (CLM) program, which helps some of Haiti’s most vulnerable women and their families claw their way out of extreme poverty. Through CLM and with the support of partners like the Mennonite Economic Development Associates (MEDA), these women walk shoulder to shoulder with Haitian caseworkers over the course of 18-months, learning the skills they need to become self-sufficient. 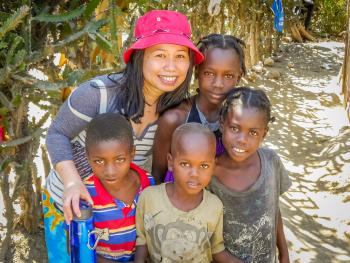 In 2014 and 2016, Schlegel Villages sent two groups of ambassadors to Haiti to learn about the life people lead there and see firsthand the impact of the dollars raised at the annual walk.

I was among them and on Sept. 11, as Schlegel Villages residents, team members, families and community partners gathered for the annual walk, where children and elders alike walked together under clear blue skies, I thought of the women I met when I was in Haiti.

Where once their eyes were filled with sorrow and shame, I saw CLM graduates stand proudly, thankful for the gift of knowledge and solidarity they had received through the program. Their children no longer went hungry and access to health care and education, which once was beyond reach, was firmly in their grasp.

Their stories won’t make the papers here, but they are no less real because of that. These women strive for a better life and they’re able to achieve their goals with the help of the dedicated people at CLM and that is an inspiration worth sharing.

“Our vision at Schlegel Villages is to create a community where people can live vibrantly and have a full, meaningful life within our villages,” said Schlegel Villages president and CEO Jamie Schlegel as he welcomed people to this year’s event, “but we also talk about reaching out beyond our villages to build community outside of our walls, to build connections outside of our walls, and this is one way of doing it, to reach across borders, across cultures, across ethnicities and grab hold of hands in the mountains of Haiti and support our brothers and sisters there.”

The impact of that support can’t be understated and with every step walked here and dollar raised, more Haitian families have the opportunity to walk a pathway to a better life.