When the team at The Village of Erin Meadows in Mississauga first heard about the Java Mentorship Program, they knew there were residents in the village who could benefit from it. 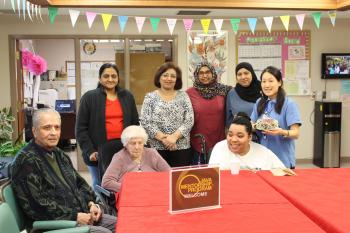 These are the residents who are at the greatest risk of depression, isolation and loneliness – those who, for any number of reasons, often choose to avoid the social aspects of village life, no matter what team members do to try and inspire them. Java mentorship offers this type of person a different opportunity for connection by pairing them with two trained mentors: a volunteer from inside the village and one from the community outside.

These mentors are offered education in order to better understand what the person they are meeting with may be going through in life and they are provided with knowledge that might help them break through the emotional barriers that can exist when someone is facing loneliness. They also have plenty of opportunity to meet with their fellow mentors to discuss their experiences and learn from each other.

Designed by Kristine Theurer, founder of the highly successful Java Music Club mutual support program that has drawn Schlegel Villages residents together for more than four years now, Java Mentorship is still being developed and Erin Meadows, along with 10 other Schlegel Villages, was part of a critical seven-month study to determine the impact of the program on everyone involved.

Though the results of this pilot are still being officially analyzed, the team at Erin Meadows has no doubt of the program’s success. They see it every day when they walk by one of the program’s beneficiaries – someone who may never have left their room a year ago – sitting alongside Main Street with a smile upon their face as they wrap themselves in conversation with an acquaintance.

Recreation team member Larysa Mikhnevych says part of the reason they were so successful at Erin Meadows was the fact that in the beginning, volunteer coordinator Larissa Alsayed took the time to recruit the right volunteers who represented the cultural diversity of the village.

“She found the right people with the right attitude and the right mind and desire to help residents,” Larysa says of her fellow team member. “Our external mentors, our volunteers from the community, are from different backgrounds and they signed up to be volunteers just to know better the life of Canadian society.”

Tapping into the wisdom of the older generations is a marvelous way to achieve that goal and in the process, the volunteers were able to offer the best of their experience in support of the people in the mentorship program.

Helen Choi was the other team member who spearheaded the program and she says that, collaboratively, the team set the foundation for success from the very beginning because they had in-depth knowledge of the people they were hoping to reach through the program, making it easier to pair them with the right external and internal mentors.

Recreation director Sami Kermani points out that the volunteer mentors were both passionate and dedicated, never once missing a session in the entire seven-month period.

Larysa says that if the study seeks to determine whether or not people who are at risk of depression or isolation can find comfort and even joy in the wider village community, it was “very successful.”

“At the end of the program, after providing those visits, we saw those residents on our Main Street – they didn’t want to stay in their rooms, they wanted to participate in programs and . . . they want to socialize with the team members and other residents.”

“That’s a success in our village and we are very grateful to have tried this program.”

The hope and expectation is that it will continue to be an important part of village life that will help combat the threat of loneliness that can affect so many people living in a long-term care environment.

In Gratitude for the Team at Tansley Woods

Collaboration, Love and Healing at The Village of Tansley Woods