Remembrance Day and the Gift of Strength and Wisdom

On a solemn Remembrance Day four years ago, I sat with a gentleman named Victor at the back of the Town Hall in The Village of Taunton Mills for the service. As the sound of a lone bugle lamented the fallen of history, I noticed Victor weeping. Taps, that unmistakable, sorrowful melody, has inspired tears upon my cheeks at times, and we later spoke about the emotion music can evoke. 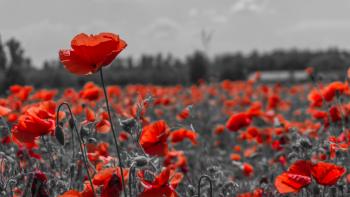 Victor’s older brothers fought in Europe during the Second World War and he recalled as a boy worrying every night, sometimes over the sounds of German air raids in skies over the English countryside, that this day might be the day he loses one of them. I carried a similar fear when my older brother served overseas in conflicts that were obscure in my mind at the time; Kosovo in the Balkans and later, the dusty landscape of Afghanistan.

Throughout history, soldiers have stepped into the most intense of fear, while loved ones at home did all they could to support from afar, if with nothing more than love and hope for a safe return. So many received nothing more than memories at the end of war, while countless others received their loved ones back with wounds, both physical and emotional, that would scar them forever.

To sit with Victor that November 11 was an honour for me. Every Remembrance Day for as long as I can recall has been an opportunity to share space, time and thought with others whose connections to war and loss or peace and hope may be different than mine, but are rooted in the same sense of gratitude.

This year is different. In my hometown, the service is not a public one. The hundreds of wreaths lain upon the foot of the cenotaph will be done so by one or two Legion representatives. In a similar vein, the ceremonies in our Schlegel Villages are different as well, though no less important. The nature of life in 2020 limits our ability to gather, but not our ability to reflect and remember.

I think of the sacrifices of loved ones who waited for word of their brothers and fathers, sisters and friends, daughters and sons. In the darkest days of the Great War and The Second World War, people at home went without so the soldiers could have what they needed; there were rations and sacrifices, all for the greater good. There has been sacrifice this year as well, though perhaps it hasn’t been as collective as it was back then, for consensus around the battle against a pandemic in 2020 seems harder to reach.

But still, as I reflect this Remembrance Day, I think of Victor and the countless others I’ve met over the years and I think of their sacrifices over a lifetime, all they gave and all they lost. I find inspiration in that and today, along with those who fought for freedom, I consider the people I work alongside on the frontlines of health care in a different type of battle, and I feel grateful. Our older generations and all they lived through to make the world better are the greatest of examples, and today they offer strength in their wisdom so we may forge ahead.

That strength is certainly worth remembrance today.

The Gift of Peace of Mind in Vaccination for Expecting Mothers

Schlegel Villages Recognized as Leader in HR Innovation for 2020