Strolling through Memories on the Shores of Georgian Bay

In 1940, Nancy Aston moved to Collingwood on the south shores of Georgian Bay. It was the height of the Second World War and her husband had a job in the shipyards where he worked until 1946 when the work slowed and they moved to Kitchener.

Since then, she only passed through the area once in a while on the odd trip north to the tip of the Bruce Peninsula, never staying for any length of time to see how things have changed over the years. 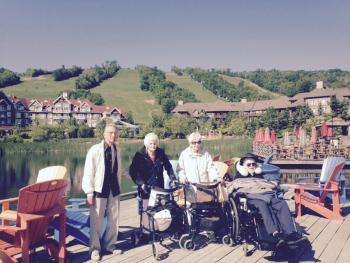 That’s part of the reason she was eager to join a small group of residents and team members from her home at the Village of Winston Park on a four-day trip to the area. She knew that physically the trip might be demanding – she’s in her 90s now and requires oxygen – but it was worth the risk for an opportunity to be immersed in the area that was so important in the beginning of her adult life.

And how things have changed.

The shipyard is now a marina filled with pleasure boats, condos are spread along the shoreline. In Nancy’s early days, the ski hill at Blue Mountain was but a few trails carved out of the woods on the steep eastern slopes of the hill overlooking the waters of Georgian Bay. The resort that stands there today seeks to rival any in Western Canada or even Europe, if not in vertical skiing at least in atmosphere.

Four other residents and four team members joined Nancy on the excursion, which was open to residents from both the long-term care and retirement neighbourhoods in Winston Park. The team members were there to ensure everyone’s needs were fully met, but beyond that they were also able to deepen their relationships, simply by enjoying the company of the group in a new setting.

“I really enjoyed the team that took us there,” Nancy says. “They were marvelous.”

Two days were for travel and two were spent exploring and dining out. They visited the museum in Owen Sound, one of the residents savoured a fine steak dinner he’d been craving for some time and a highlight for Nancy was a stop at Sunset Beach, where she and her husband would often spend their spare time in the summer months when the long work days were finished.

“That was our beach,” Nancy says. “I just have good memories, and it’s all so different now. It was great to have a chance to go back.”