Team Members at the Core of Success and Progress in 2014

President and CEO Jamie Schlegel on the year behind us

Time has a funny way of flying past us when we’re having fun, says Schlegel Villages president and CEO Jamie Schlegel, and 2014 has certainly been no exception. It’s two days before Christmas and with a few minutes of free time to spare Jamie takes a moment to reflect on where the organization was a year ago and where it’s headed as 2015 dawns. 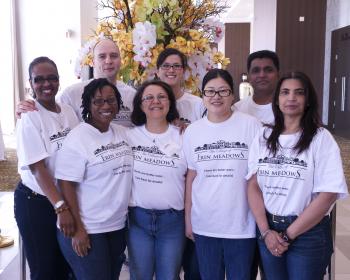 This is no easy task, he admits, for there were many grand events that took place this year and in each one a wealth of pride flows from every person who was involved. There were two separate Schlegel Olympics events, for example, that drew residents and team members from each village to either Tansley Woods or Taunton Mills for some healthy competition and fellowship. At the end of February, a team of Schlegel Villages ambassadors volunteered their time and skills to help neighbours in Haiti – a trip that was backed with the support of many people across the organization. There was a trip to the annual Pioneer Network conference, two highly successful leadership retreats, a grand opening of a new village and the opening of new neighbourhoods in another, countless summer festivals and potluck dinners – the list could go on and yet, as noteworthy and memorable as each of these events is, Jamie makes note of success in a different way as he looks back on the year.

“I really think about the progress that we’ve made on the ground and in the shadows, corners and cracks of what we do every day that I think is most meaningful to me,” Jamie says.

As an example, he points to the Behavioural Supports Ontario (BSO) teams that are working with community partners to foster a new approach to care for residents whose expressions can be challenging. “They’re just doing outstanding work and being identified as leaders within their LHIN’s (Local Health Integration Networks) to provide education to other organizations,” Jamie says. “It doesn’t always get a lot of profile, but it is important, on-the-ground work finding ways to create meaning and purpose and higher quality of life for people who have personal expressions. That’s at the heart of what we do and it doesn’t always get a lot of fanfare and it’s not always in the limelight, but it’s really critical and we’re doing great work in those areas.”

The multi-year development of neighbourhood teams that are self-driven and closely connected to the people they serve is another example of steady progress towards improving life quality for residents, Jamie says. There is the ongoing LIVING in My Today training that’s helping team members, residents and families to better understand the realities of life with dementia. Every day Jamie see teams “getting better and better at what they do, honing their skills, improving their own understanding, broadening their own knowledge base and deepening it, and then also developing a more cohesive and higher functioning team that can deliver higher quality of life to our neighbours.”

“This is where the real work happens,” he says, “and as I reflect back on the year I’m so amazed by the progress we’ve made and so grateful to the neighbourhood teams for driving these initiatives forward because these are what make us better and better every day going into the future.”

75th Anniversary of VE Day: We Must Never Forget the Lessons of History