When I step into the Community Centre at The Village of Erin Meadows on Aug. 20, recreation director Sami Kermani greets me as she always does, with a wide smile and outstretched arms for a hug.

I’ve come for a meeting of The Village Advisory Team, which gathers regularly to help guide The Village through its many ambitious goals to change the culture of aging. But before the meeting starts, Sami hands me a piece of paper.

“There’s another story I’d like to share with you,” she says. “I hope I’m not asking too much?” 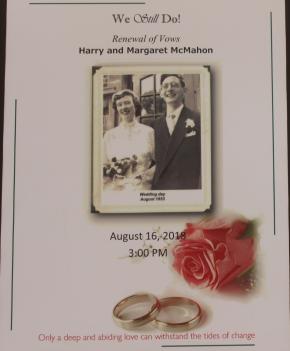 It can never be too much, for each story we share through The Village Voice is another notch against the stereotypical views on aging that tend dominate the mainstream; each story of connectedness and relationship-centred care counters the negative ones about life in long-term care that make headlines and perpetuate the myths. Few people ever know the overwhelming good that happens every day.

The piece of paper Sami hands me is a notice of a renewal of vows for Harry and Margaret McMahon. Aug. 16 marked their 65th Wedding Anniversary, and this small ceremony, organized by the team, was a special touch to mark the love that has carried them together through this oft-complicated life.

I first met Harry and Margaret in late fall, 2017. Harry was an assertive, new resident in The Village, while Margaret had already lived there for a year. She lives with the ongoing progression of dementia, smiling often and wide, her sense of humour still largely intact, but there is confusion a lot of the time.

Still, they shared with me that day the story of their meeting in early 1950s west-end Toronto. Harry spoke of convincing Margaret’s sisters and father – the core of a hard-living Irish family that loved deeply – that he was the right fit for her. Following a joke he wasn’t sure how to take, Harry shook her father’s hand on the front porch over cigarettes and a beer to seal their fate, and they were married that summer.

Now they live together at Erin Meadows, though in separate neighbourhoods that are able to provide the right care for each of them. Harry has slowed a bit since I saw him last, but his keen intelligence and the love he feels for Margaret shines through clearly as he speaks about how nice it was for the team to help celebrate their vow renewal and anniversary.

“You are an inspiration to all of us,” Sami says to Harry, her hand gently resting on his arm. “Love was truly in the air that day.”

“It really brought tears to all of us,” says Sujeeva Muthulingam, who has grown to know the couple quite well over the past years. “Honestly, it is so beautiful to see 65 years.”

At the bottom of the piece of paper Sami handed me, underneath a photo of the wedding day that prompted Harry again to tell me how beautiful his wife is, a phrase is written: “Only a deep and abiding love can withstand the tides of change.”

In Harry and Margaret, we see such deep and abiding love; something we all aspire to have in this oft-complicated world.

75th Anniversary of VE Day: We Must Never Forget the Lessons of History