Olympic Success in London and Brampton

In mid-August, the Villages of Sandalwood Park in Brampton and Glendale Crossing in London were transformed into Olympic venues, welcoming competing residents from across Schlegel Villages’ eastern and western villages respectively. The events, timed to coincide with the XXXI Olympiad in Rio de Janeiro, are a cornerstone of Schlegel Villages’ Wisdom of the Elder signature program, which at its core recognizes that all residents, regardless of age or ability, still have much to contribute to their community. 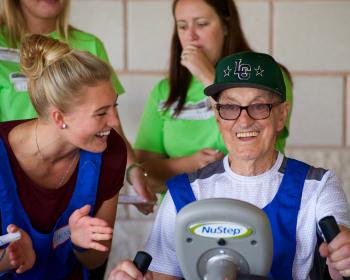 The 2016 version of the Schlegel Olympics follows the successful examples set in 2010 when the games were first held alongside the official event in Vancouver. The summer olympics in 2012 followed and in 2014 the Schlegel Olympics mirrored the event in Sochi, Russia. This year, as residents competed in cycling, biathlon relay, equestrian racing, ladderball, arm wrestling and beach volleyball, people from afar could watch live as events were broadcast through social media and YouTube.

Prior to the main competitions, each village held qualifying tournaments to choose which residents would represent in Brampton and London, and on Aug. 16 and Aug. 18, busses were filled and all the athletes and their support teams descended upon the host villages.

While friendly competition has always been part of the excitement at these and other Wisdom of the Elder events in the past, where bragging rights as the champion village are always on the line, the true benefit is the camaraderie and fellowship that emerges as residents from various villages connect and reconnect with each other.

“It was super to meet others,” says Aspen Lake’s Harold Pierre, who took home a silver medal as part of the beach volleyball team. “Coming off the bus was exciting.  I was really impressed by how everything was set-up, there was at least 100 helpers.”

The event could never happen were it not for the small army of volunteers and team members that work to organize and execute the events, and residents were grateful. "I'm glad they take the time to do it,” says Riverside Glen’s Geri Winer. “It is a good change of pace."

Ron Rochon, who says with a smile that travelling to Glendale Crossing on the bus from Windsor was more exciting than the trip home because he didn’t win the championship in biathlon, agrees that team member and volunteer support means a lot.

"There was great support and encouragement from the team members,” Ron says, “win or lose."

Beyond the relationships that are forged stronger through the shared experience of competing in the games lies another positive benefit that can’t be overlooked. The games encourage residents in all villages to challenges themselves physically, and in doing so their health can only improve.

Aspen Lake’s John Kelch, who says he “would have participated in all of the events if I could," is one example of this benefit in action. John took home a silver medal in cycling, which actually translates into steps on the NuStep fitness machine.

“John's best score in preparing for the event in London was 952 steps in seven minutes,” explains recreation director Jenny Brown. “The day of the event, with the crowd cheering him on and the excitement of competition, he tallied 1126 steps - a new personal best.”

People at the village back in Windsor were watching on the live feed, including his wife, Louise, who was able to send encouragement through Facebook.  Her comment, ‘Go, Johnny!’ brought a smile to his face, Jenny says, and he was so thrilled to receive the Silver Medal, it brought tears to his eyes.

That’s the type of reaction that organizers hope for, and perhaps riverside Glen’s Mary Parker sums up the event best when she says: “It was a beautiful day, everyone was so friendly.”

LTC Residents upon the Floor? Benefits of a New Exercise Class at University Gates