At one point a few years ago during Masterpiece Gala: Celebrating the Wisdom of the Elder, an event hosted by Schlegel Villages to showcase the artistic talents of residents from all the villages, I had the opportunity to speak with Ron Schlegel. 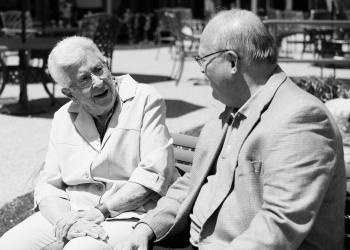 The greatest untapped resource in Canada, if not the world, he told me, is the collective wisdom of our oldest generations. Ron, the farmer, scholar, entrepreneur, urban visionary and philanthropist who founded Schlegel Villages and the Schlegel-UW Research Institute for Aging, among several other successful ventures, is his own example. To speak with Ron is to understand how a kind heart and ambitious spirit can combine to create magical transformation in our communities and in the lives of those who live in them. He spends a great deal of time in the villages, speaking with and learning from residents, and the odd time a young new team member may even mistake him for one of the residents. He is beyond humble and always eager to ask questions so that he may learn more about the person with whom he converses, and he shares his philosophy simply and openly.

That Schlegel Villages makes a point of regularly celebrating the wisdom of the older generations is a direct result of Ron’s influence, and throughout the month of June – Seniors’ Month – the conversation about elder wisdom will spread through the power and connectivity of social media. The idea is simple: in all the cities from Whitby to Windsor where Schlegel Villages operates, a green bench will appear on a chosen day in June. An older resident will be sitting there and the community – from mayors to sports teams to everyday folks – is invited to sit and share conversation. From there, photos and quotes will be shared through platforms like Twitter, Instagram or Facebook, all using the hashtag #ElderWisdom.

“It’s about getting people to talk about seniors online and using social media platforms to encourage the conversations about seniors and to talk positively about the elders in our communities,” says Ted Mahy, online engagement manager with Schlegel Villages. “It’s driven from the Wisdom of the Elder signature program so it’s getting our residents to be involved in our social media platforms and involved in their own communities.”

But even before the first bench emerged in Kitchener on June 8, Ted was able to see just how far the conversation can potentially reach, and it certainly expands beyond what “community” typically looks like.  Across Canada and the United States and as far away as Australia, Russia and China people were attracted to the Website Ted created, www.elderwisdom.ca, and as the scheduled events create more buzz he’s expecting the idea to continue to spread.  Ideally he’d like to see people take pause on a more regular basis and cherish the opportunities they have to learn from older generations, whether it’s team members supporting a resident in one of the villages or a shopkeeper in the community spending a few more minutes with one of their patrons.

Our greatest untapped resource may be the wisdom of the elder; through this campaign perhaps it will get a little easier to share the bounty.

Look for a Green Bench near you and visit www.elderwisdom.ca to learn more.

Perseverance, Courage and Determination through 500 Days of COVID

Combined Efforts in the Quest for Knowledge: Schlegel Villagers in the Realm of COVID Research

Global Connections at The Village of Humber Heights